Mursi is a unique Surma tribe in Southern Sudan and the language they speak is also called Mursi.

When a Mursi girl becomes a teenager, she begins the process of lip stretching. The girl has her bottom teeth removed to make space for a lip plate, which is increased in size annually.

The plates are inserted into the lip causing it to stretch, and it is said that the larger the clay plate, the more the woman is worth before she gets married.

Mursi women only wear the plates for a short time because they are so heavy and uncomfortable.

The practice was first carried out to allegedly make them look ugly when Arab merchants continually raided their villages in search of slaves.

However, that explanation has been rejected as studies reveal that the plates are a symbol or expression of social status among the Mursi people.

The supposed historical link between lip-plates and the activities of slave traders is an idea that goes back to colonial times.

In an article in the September 1938 issue of National Geographic Magazine, C. and M. Thaw report meeting women with large plates in both their upper and lower lips near Fort Archambault, on the River Chari, about 400 miles southeast of Lake Chad, in what was then French Equatorial Africa:

“Here both the upper and lower lips of girl babies are pierced and small wooden plugs inserted into the holes. As they grow up, these holes are gradually increased in size until they reach the dimensions of large soup plates… This form of disfigurement was begun centuries ago to discourage slave raiders, the French Administrator told us. Why it didn’t discourage the young men of the tribe, as well, we will never know. (Thaw & Thaw 1938: 357)”

The use of lip-plates is neither peculiar to Africa nor to women. Amongst the Kayapo of Brazil, for example, senior men wear ‘a saucer-like disc some six centimetres across’ in the lower lip, according to Turner, 1980: 115.

“The lip-plug, which reaches such a large size among older men, is incontestably the most striking piece of Kayapo finery. Only males have their lips pierced.

“This happens soon after birth, but at first only a string of beads with a bit of shell is placed in their backwardness by outsiders and that it will help to prolong their exclusion from the economic and social benefit of incorporation into the Ethiopian state. In particular, it will be an obstacle to the education of girls. Here I should mention the recent activities of Protestant missionaries who, since 1989, have established themselves in the Mago Valley, where a group of Mursi had migrated a few years earlier because of drought.

“The missionaries have not, as far as I know, spoken out specifically against the lip-plate. But their converts, who are at present concentrated around

the mission station and may number in the region of 50 individuals, are likely to be at the forefront of efforts, coming from within the community itself, to abandon such ‘traditional’ practices and customs.”

The Mursi (or Mun as they refer to themselves) people are the most popular in Ethiopia’s Omo Valley. They are well known for their unique lip plates. Mursi are a Nilotic pastoralist ethnic group that inhabits southwestern Ethiopia.

They principally reside in the Debub Omo Zone of the Southern Nations, Nationalities, and People’s Region, close to the border with South Sudan.

According to UN, about 87% of Sudanese women aged between 14 and 49 have undergone some form of FGM. In Sudan it is not uncommon for women to get the inner and outer labia, and usually the clitoris, removed and FGM can result in urinary tract infections, uterine infections, kidney infections, cysts, reproductive issues and pain during sex.

Before now, there has been a global trend towards banning the practice. However, according to a Unicef report carried out in 29 countries in Africa and the Middle East, the practice is still being widely carried out, despite the fact that at least 24 of these countries have legislation or some form of decrees against FGM. FGM was already illegal in some Sudanese states but these bans were widely ignored.

BBC Sudan analyst Mohaned Hashim notes that there have been previous attempts to ban FGM across the whole country but parliament under long-time leader Omar al-Bashir rejected the recommendations. Women were at the forefront of the movement that toppled Mr Bashir in April 2019. Campaigners accused the former government of discriminating against women in various ways – including preventing women from wearing trousers.

In November, Sudan repealed a restrictive public order law that controlled how women acted and dressed in public. The FGM amendment to the criminal law was approved on 22 April, Reuters news agency reports and under the amendment, anyone who performs FGM either inside a medical establishment or elsewhere faces three years’ imprisonment and a fine.

Dark-skinned women everywhere are bullied and discriminated against for their dark skin colour. Nyakim Gatwech uses her platform to address and challenge that. 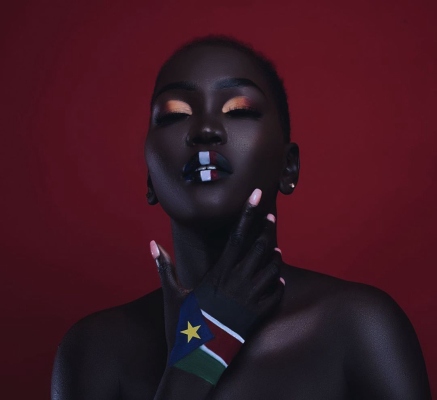 A Uber driver offered “Queen of the Dark” South Sudanese model, Nyakim Gatwech,  $10,000 to breach her skin. Nyakim laughed off the offer. “Why on earth would I ever bleach this beautiful melanin God blessed me with?” She asked.

Nyakim was born in Ethiopia where her parents had fled the South Sudanese civil war. The family then migrated to Kenya where they lived in refugee camps. They were later relocated to the US when she was 14.

Nyakim has been bullied several times due to her dark skin. People feel no shame telling her to bleach her skin, like the Uber driver who even offered her money to do it.

Colourism – prejudice or discrimination against individuals with a darker skin tone.

Not to be deterred, Nyakim took to social media to share her struggles and to inspire other dark-skinned women. She regularly posts photos with heartwarming captions about self-love and challenges the conventional beauty ideals that hold that “lighter is better”.

While the world has a long way to go to getting rid of colorism, dark-skinned girls and women see themselves represented in the media through women like Nyakim.

We’re all beautiful in whatever shade of skin colour God creates us in. – Nyakim Gatwech

Why should being dark be bad? Embrace who you are. – Nyakim Gatwech

I am the queen of the dark who brings light and love to those around me. – Nyakim Gatwech

Mary is a survivor of rape in South Sudan, and her story is a point of interest following the disasters in the region.

Initially, her husband was shot, and then, soldiers killed her young sons, ages 5 and 7. What’s more, they snatched her daughter from her hands, leaving her with nobody.

Mary hails from the Nuer tribe in South Sudan.

Recently, the people have been experiencing a power struggle between the country’s President Salva Kiir, of the Dinka tribe, and his Vice President, Riek Machar, a Nuer.

They fought this war based on ethnic reasons, and the Northern part of the country has been turned into a wasteland.

According to the United Nations, 50,000 people have been killed, and close to 4 million people face famine, 2.2 million fled their homes, and they have all told the story of severe maltreatment, torture and manslaughter.

Among these people who suffered the adverse effects of the war, Mary and her family members were some of the people who sought freedom and looked forward to gaining refuge. They were at a U.N. peacekeeping base in Bentiu when they encountered Kiir’s forces on the road in June 2014.

According to Mary, 27, the soldiers told her that they perceive the Nuers to be rebels, and the reason her sons were killed is that they don’t want them to grow up becoming fighters.

“We don’t kill the women and the girls,” the soldiers told Mary.

“They said they would only rape us. As if rape were different than death,” Mary adds.

Following the murder of her husband and sons, five soldiers forced her to watch them rape her 10-year old daughter, Nyalaat.

“I couldn’t even see my little girl anymore. I could only see blood.” Mary says. After they had raped her daughter, they played a game of taking turns with mother and daughter, raping them both.

Within a few hours, Nyalaat died and Mary says that she wanted to die too. However, Mary didn’t give up. She rather made it to a U.N. camp for civilians displaced by war.

This didn’t stop the soldiers from attacking evebtuaeve. The violence continued, and the soldiers were still able to make their way into the camp and rape all the women they were able to get their hands on.

“IT HAPPENED TO ALL OF US: LITTLE GIRLS, GRANDMOTHERS. THEY DIDN’T CARE. IF YOU CALM DOWN WHEN THEY ARE RAPING YOU, THEY WON’T BEAT YOU. BUT IF YOU RESIST, THEY WILL BEAT YOU, EVEN SO MUCH TO USE THE GUN IN YOU.”

Read more in the link below:

Veronica has been speaking out since she was a child. As a secondary student, she noticed a gap between what women were doing in their communities and what was reported in the media. To address this, she did research in her community, wrote up her findings in a school newspaper—and pinned her work to the walls for the other students to read.

Veronica went on to become a pioneering journalist, radio broadcaster and producer.

As a producer, Veronica created educational programs on family planning, reproductive health, childcare and other topics of importance to women. More recently, she founded theAssociation of Media Women in South Sudan and established her own radio station.

In South Sudan, men own most private media companies and the majority of reporters are men. Most female journalists work for state-owned media companies where men also have more decision-making power, and where political bodies censor the content. As a result, there is very little space for women’s voices in South Sudanese media.

Veronica’s organization aims to add more balance to the news by increasing the visibility of women’s issues and offering support and training to female journalists. Veronica’s radio station also gives women in rural areas the opportunity to learn about government policies and services, and to express their views on local and national issues.

“It is very important to have women in media and women as civil society,” says Veronica. “I had to take the initiative of establishing an association for media women in South Sudan so that we fill the gap of having balanced information and to advocate for the rights of women through and in media.”