Nigerian businesswoman, philanthropist and founder of Flourish Africa, Apostle Folorunso Alakija, has announced the launch of a N1 billion fund to promote female-owned businesses in Africa.

Flourish Africa is a female empowerment platform designed to help women achieve their full potential. It is a place for both female millennials and adults to access information and the right networks that will enable them grow in their chosen careers and businesses while prioritizing health and wellness.

According to the statement announcing the fund, Apostle Alakija disclosed that the initiative would focus on supporting the entrepreneurial activities of at least 2500 female-owned businesses through funding and structured training over a period of 5 years.

In her announcement, she said

“I’m happy to launch the Flourish Africa 1 billion Naira fund on my 70th birthday as a gift to hardworking and enterprising women. This initiative will focus on empowering women economically and socially for the benefit of
their immediate families and the society.”

She further explained that a minimum of 500 female micro-entrepreneurs would be trained annually. After the training, 100 audacious entrepreneurs from the pool will be able to access grants to the tune of N2 million each for their businesses from an annual fund of 200 million Naira.

While expressing her enthusiasm about the initiative, she explained that she looks forward to empowering one woman at a time as she strongly believes that women are a crucial part of Africa’s development. She restated her commitment to empowering as many women as possible in Africa as one of the things she would want to be remembered for.

She added that the main objective of Flourish Africa is to create an enabling platform that provides skill development, mentoring, access to marketplace for female entrepreneurs.

This concept of empowerment stems from Apostle Alakija’s assertion that women have the potential to flourish if a community of like-minded individuals who share a common goal and purpose pool together and make an impact in every community they find themselves in.

With the introduction of higher educational standards, the women of Africa have started experiencing opportunity and freedom to enterprise more, which was against the old believe that African woman can actually strife to best and peak of their carriers, recently African woman has demonstrated the real vigor in typical Africa, they have been performing expediently well in their various chosen field, this brought Africa to limelight which her contemporaries have been striving to attain. So we ask:

Ten African women have shown this and have become the top 10 richest African women that employ thousands of people through ventures and firms which has continually help to keep many families and household in shape, the full alacrity African woman exhibit has always be of notable and paramount importance.

The top ten richest African women are listed below

This woman Isabel Dos Santos is the richest African woman. The eldest daughter of the wealthy former Angolan President Jose Eduardo Dos Santos. She is part of the board of directors of several firms in Portugal and Angola of which media firms and major Portuguese banks with oil and diamond interest.

Isabel Dos Santos has shares in Ciminvest, an Angolan cement firm and also another firm was known as Banco African De Investimentos that made her among the top list, she studied engineering in the well-known Kings College in London and her first enterprise was at the age of 24. Her stake in the Portuguese media conglomerate Zone Multimedia is up to 14%. Isabel Dos Santos also has major stakes in the banks of Portugal like Banco Portuguese De Investimento, Banco Espirito Santo and in Portuguese energy firms like Energias De Portugal. These investments have made her more than $1 billion mark which is why she became the first woman in Africa to be a billionaire.

Next to Isabel Dos Santos is this woman who is 66 years old. Folorunso Alakija she is Africa’ s second richest woman. She is the Executive Director of Famfa Oil, an oil and gas exploration company that is worth up to $600 million.

Folorunso Alakija was the secretary of Africa’ s earliest investment banks known as International Merchant Bank of Nigeria in the 1970s. She proceeded to do her studies in fashion design in the United Kingdom and then formed her fashion house firm within Nigeria known as Supreme Stitches in the years 1985, from where she became the largest designer in Nigeria. Then in 1993, the Nigerian President Ibrahim Babangida awarded her firm, Famfa Oil, a license in oil prospecting after which the firm turned to be one of the most prolific blocks with Famfa Oil having up to 60% stakes in the block. President Olusegun Obasanjo in the year 2000 acquired in an illegal manner up to 50% stake in the block without proper compensation to Alakija or her firm but this was revoked later by the Supreme Court of Nigeria.

She was known popularly as Mama Ngina, who is the widow of the first president of Kenya, Jomo Kenyatta and also one of Africa’s richest women. Even though she had undeclared assets, she remains among the richest women in Africa. She is 84 years old and is welcoming and charitable. Her life now is reclusive and she has gained much respect from the citizens of Kenya due to her position in promoting and defending enterprises that include sectors like education, banking, farming, insurance, manufacturing, hospitality and real estate. She has many stakes, investments, and portfolios that are under her authority.

Mama Ngina Kenyatta is among major shareholders in one of the largest privatized banks in Kenya known as the Commercial Bank of Africa and a chain of hotels known as Heritage. This is an endless list including Brookside Dairies which is an East African leader in the industry with shares that are from East Africa to the Middle East. Others include Media Max which is a media company and Timsales Timber which is among her portfolio. She also has stakes in estate sector where she developed a 500-acre estate which is among the largest gated community in the region.

The 58-year-old is the 4th richest woman in Africa. She runs enterprises and is the CEO of a diversified Nigerian firm known as Bolinus Group International including real estate interests, oil interests, and banking interests. She is a brand member of the Unity Bank Plc where she is also engaged in photography and communications. Her enterprise activities reach the oil and gas sector, finance and banking which include real estate that has hundreds of townhouses in the choicest neighborhoods of Nigeria with properties in the United States and Europe.

Hajia Bola Shagawa is a board member of a Nigerian group known as the National Economic Partnership for African Development ( NEPAD). She seemed to be aligned with necessary political and military personnel in Nigeria and is very much close to the former Nigerian president Ibrahim Babangida and Same Patience Jonathan.

The 56-year-old is a South African millionaire that became head of the real estate and insurance firm of her father known as Liberty Investors. She was the only daughter of Appelbaum. Donald Gordon who is a South African billionaire. Her shares were sold for her to rake in her fortune but when she sold it she now made her personal fortune.

Wendy Appelbaum was one of the Deputy Chairman of Women’ s Investment Portfolio Limited which is the first women dominated firm to be listed in the Johannesburg Securities Exchange (JSE) with assets that exceed with R1 billion. She made investments in De Mortenson which is a wine estate that is famous in the region of Stellenbosch. She has made philanthropical aid that is more than 23 million US dollar to support the Gordon Institute of Business Science and the Donald Gordon Medical Centre in her father’s memory. The net worth of a Wendy Appelbaum by early 2012 is up to $259.3 million which have made her one of the African women.

Wendy Ackerman is a retail tycoon in South Africa and also a Non-Executive Director of Pick N Pay Holdings Limited. Her assets are worth $190.2 million and she runs the Ackerman Family Trust. Her husband has up to 50% of the major grocery of South Africa. The company is worth $3 billion and they have outlets in Zimbabwe, Nigeria, Australia, Zambia, Namibia, Mozambique of which Ackerman is the Executive Director.

The 57-year-old South African woman is a former unionist with assets that are $150 million. She has spent up to 13 years as a negotiator for the National Union of Mine Workers in South Africa after which she later became the Executive Director of MTN which is the largest telecom company in Africa. Now, she is the CEO of Smile Telecoms which is a telecommunications products firm. She has initiated the expansion of MTN across Africa and have played a major role in accumulating Iranian and Nigerian operating licenses for the firm. She was also the director of First Rand Bank and Johnic Communications. Her assets which are up to $150 million made her among Africa’s richest women.

She formed the mining firm known as Mmakau Mining in South Africa that has operations in platinum, gold, uranium, chrome mining and exploration. This 57-year-old woman first became a mine worker. She is now the president of an association known as the South African Mining Development Association and she won an award from the Global Foundation for Democracy.

The total calculation of her assets is worth more $43.1 million and she double to be among the largest and biggest shareholders in listed loan stocks firms known as October Investments and Premium Properties which were both formed by her father Alex.

Billionaire businesswoman Folorunsho Alakija and chancellor of Osun State University, has laid the foundation for the 250-bed teaching hospital she is donating to the university.

This is in fulfillment of the pledge she made shortly after her appointment as the Chancellor of the university in 2016 by the Governor of the State of Osun, Rauf Aregbesola.

“The decision to lay the foundation of the Teaching Hospital today is deliberate. Deliberate in the sense that I agreed with the proposal of the University Management that the foundation laying ceremony should coincide with the 7th convocation ceremonies and more importantly, as a mark of honour to the dynamic Governor of the State and Visitor to the University, Ogbeni Rauf Aregbesola before he leaves office,” she said. 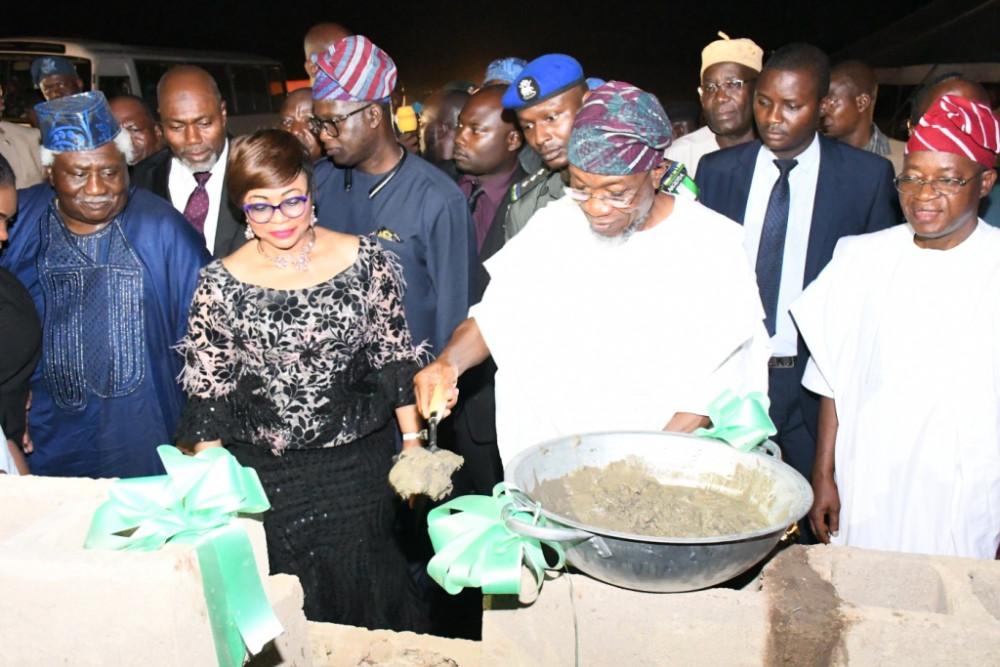 The idea for this hospital was borne out of my love for the young ones, mothers and indeed humanity. The event of today is the fulfilment of my pledge when I was appointed Chancellor by the Visitor to the University, Ogbeni Rauf Aregbesola. In Nigeria today, there are few children’s hospitals. If our children who are the future of this country do not have access to timely and qualitative medical services, then where lies the future of this country? We must do everything in our capacity to ensure that our children and teens have everything necessary for them to grow and excel, and one of such necessities is good healthcare services.