The competitive AWP Network Vendor programme, which launced last year on July 15, 2020, received over 2,500 vendor applications. Only 100 vendors were accepted into the programme, while 61 vendors were certified to complete the programme and received the opportunity to pitch their products to ShopRite Nigeria. The programme in collaboration with ShopRite provides a real life opportunity for women entrepreneurs in Nigeria to get their products out into the marketplace.

The AWP Network Vendor programme will continue to work with small business owners who are interested in operating as suppliers, by working to recruit additional retailers as partners. The AWP Network also plans to invest more in food manufacturing and innovative programs.

Mary Olushoga, Founder of the AWP Network states, “Clearly, we see that this is a competitive program however, we need to do more to improve and increase a healthy food supply chain pipeline. Congratulations to the vendors accepted and approved to supply to ShopRite.”

In addition to pitching to ShopRite Nigeria’s Head of Procurement, Dawid Moelich; program participants also got the opportunity to pitch to Shimite Bello, Executive Assistant on Export Initiatives and Coordinator at the Delta State Government Unido Center, and Adaorie Udechukwu, Gender Specialist at the IFC.

The AWP Network vendor programme aims to increase the number of women entrepreneurs who supply to large retailers in a strategic manner. The AWP network Vendor program is a capacity building program for local vendors seeking professional guidance regarding best practices and guidelines to become vendor suppliers.

Nigeria has a long way to go when it comes to women’s rights, as political, religious and cultural nuances continue to shape and can restrict the visibility, participation and leadership roles available to Nigerian women. However, we can start by implementing some of these recommendations and ensure that the women’s justice agenda is created and is a priority at the local, state and federal levels of government.

On April 28, 2019, Matt Obono, convener of the TAP Initiative, reported that 70 women were arrested and taken to the Utako police station in Abuja.

As I type, 70 girls were arrested and brought to Utako Police station last night. This is in addition to the ones who were arrested on Friday night. Their offense; clubbing and in some instance, prostitution. Some have been assaulted with injuries in their vaginas.1,9431:08 PM – Apr 28, 2019Twitter Ads info and privacy3,456 people are talking about this

Their offence? Partying at a nightclub. But it did not stop there.

Obono reported allegations of sexual abuse and molestation. “The joint task force who arrested these girls also molested and sexually assaulted them,” he said.

In a bid to justify their illegal arrest and detention, the 70 women were accused of crimes they did not commit. These women were publicly shamed, humiliated and paraded by the Nigerian authorities before the media while the rest of the world watched. This is not the first time that the Nigerian government will impede on and violate the rights of Nigerian women.

Only two years ago, Dorothy Njemanze, Edu Ene Okoro, Justina Etim and Amarachi Jessyforth won a lawsuit against the Nigerian government, and were each awarded damages in the sum of six million naira (about $16,500) after they were abducted, unlawfully detained, and assaulted sexually, physically, and verbally at different times between Janaury 2011 and March 2013 in the hands of the Abuja Environmental Protection Board (AEPB) and other government agencies, such as the police and the military.

They were arrested and accused of being prostitutes simply on the grounds that they were found on the streets at night.

Nigeria has a long way to go when it comes to women’s rights and attaining gender equality. In 2016, I penned the article, “A Year in Review: What It Means to be a Woman in Nigeria,” where I tried to enunciate the many issues facing women in our country. Since writing the article, not much has improved for women in Nigeria, in spite of the numerous organizations fighting tirelessly for gender equality and women’s rights. However, these women are pushing the envelope for good, and must be commended. Political nuances, religious and cultural beliefs continue to hinder on our progress.

To date, the Gender and Equal Opportunities Bill is yet to be passed, and has been voted against repeatedly by Nigerian lawmakers, majority of whom are men. (Women in parliament constitute just 5.6 percent). To date, there remains a lack of visible female leadership in politics, policy and governance, and there continues to be an absence of women’s participation in crucial decision making circles from business to technology.

Seeing these photos from an appreciation dinner for Lagos State’s incoming governor, Babajide Sanwo-Olu, one is only left wondering, where are the women?

A big thank you to the organisers of the special appreciation dinner yesterday in Lagos.

There is a lot of work ahead of us, but we are ready and gearing to go

We are open to new & innovative ideas that will help us build #ForAGreaterLagos3806:34 PM – Apr 28, 201990 people are talking about thisTwitter Ads info and privacy

These from the Foundation for Good Governance for Development in Nigeria also beg the same question. Not represented at the event are women leaders from President Muhammadu Buhari’s team.

President @MBuhari today receieved a delegation of the Foundation for Good Governance for Development in Nigeria, led by Dr Arado Ibrahim Bayo, at the State House in Abuja. #AsoVillaToday986:50 PM – Apr 23, 201927 people are talking about thisTwitter Ads info and privacy

In a conversation with Angela Merkel, the first female chancellor of Germany, President Buhari, in 2016, made it clear that women (referring to his wife Aisha Buhari)only belong to the kitchen and to the bedroom. To date, he is yet to apologize for his comments about women.

Chief Executive Officer of Alpha Reach and popular social media commentator, J.J. Omojuwa wrote, “Nigeria is desperate for women in politics and governance” as he posted a photograph of Nigeria’s all male leadership team.View image on Twitter

Nigeria is desperate for more women in politics and governance.1605:16 PM – Apr 24, 201984 people are talking about thisTwitter Ads info and privacy

What can be done to improve the participation of women across all sectors? What can we do, as active citizens, to ensure progress in gender equality and women’s rights: Here are a few
recommendations:

Indeed, Nigeria has a long way to go when it comes to women’s rights, as political, religious and cultural nuances continue to shape and can restrict the visibility, participation and leadership roles available to Nigerian women. However, we can start by implementing some of these recommendations and ensure that the women’s justice agenda is created and is a priority at the local, state and federal levels of government.

The women’s justice agenda will advance, implement and improve the reproductive, economic, political and social rights for all Nigerian women. The women’s justice agenda will ensure that the Nigerian government will be held accountable, and will remain at the forefront of this critical fight to protect women’s rights and ensure fairness for all women living in Nigeria.

The African Women Power (AWP) Network recently hosted leading African women in technology to an engaging conversation on what it means to be a woman in technology.

The conversation explored the challenges and the progress made so far in the STEM fields with regards to women and girls in Nigeria.

Itoro Eze-Anaba, Founder of the Mirabel Rape Crisis Center was honoured at the AWP Network ‘Get Connected’ Forum for her dedication, service and commitment to women and girls empowerment in Nigeria. Founded in 2013, the Mirabel Centre is a sexual assault referral centre established to provide free holistic, high quality medical and psychosocial services to survivors of sexual assault and rape. The centre is managed by Partnership for Justice and is located at the Lagos State University Teaching Hospital. 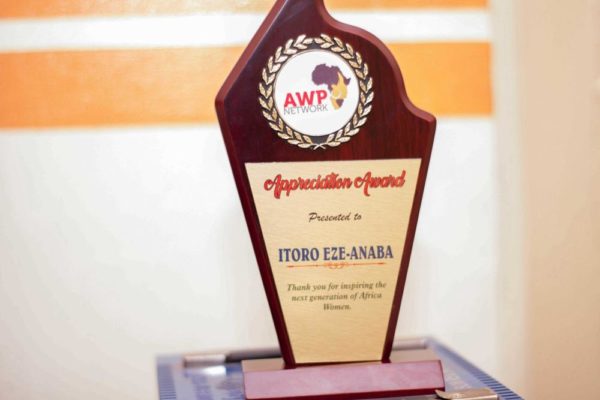 Mary Olushoga, Founder of the AWP Network states, “In 2015, Itoro Eze-Anaba was listed as a ‘AWP Network Power Woman’ for her work. That same year, her organisation was recognised by the AWP Network as one of 14 leading organisations changing the lives of Nigerian women and girls. I am indeed honoured to have established a platform that recognises African women and girls serving their local communities. My team and I were very excited to put this Forum together, as such conversations are needed in a society that does not fully recognise sexual assault, harassment, and violence as crimes against humanity.” 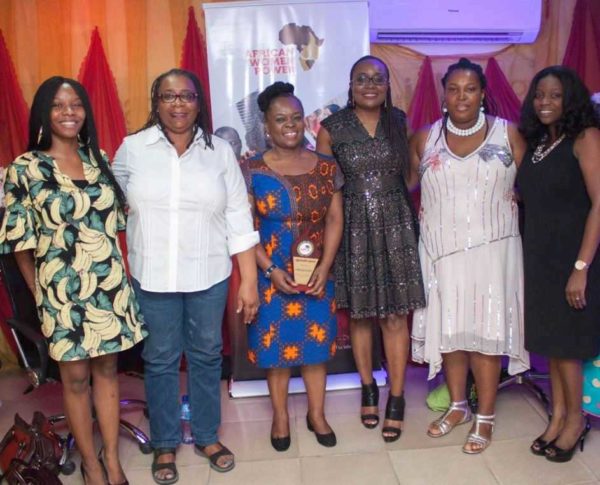 Olushoga continues, “We are glad to establish a platform that allows us to hear directly from those doing the ground work. Those who do this work are usually not recognised. These organisations struggle with everything from funding to staff recruitment. We hope that we can continue to shed light on their work so that the government, private organisations and volunteers can continue to support their efforts. It is a wonderful opportunity for me to provide a platform for leaders, for women, doing amazing work in their various communities, and especially to Itoro, thank you for all that you do and for inspiring the next generation of African women and girls.”

Eze-Anaba stated as she received her award, “Thank you to the AWP Network for honouring me with this award. It is really a pleasant surprise. Thank you to AWP Network founder, Mary Olushoga for the opportunity to speak about my work, my passion and commitment providing hope to survivors of rape and sexual violence. Also, thank you to my staff for all of the work that they do.”

On this day, the AWP Network hosted a panel on ‘Sexual Harassment and Assault in the Workplace,’ it was at this event that Eze-Anaba received her award. Speaking on the panel were the following stakeholders, Jolaoluwa Ayeye, Representative of the Stand To End Rape Initiative, Iheoma Obibi – Ashoka Fellow, Feminist and Founder of Intimate Pleasures, Nigeria’s first online adult novelty shop, Blessing Timidi Digha-Omolere – Women Deliver Young Leader, Feminist, and girl-child/sexual reproductive health and rights advocate, who came all the way from Ondo state to Lagos for the event. This event took place at the JobMag Center in Yaba, Lagos.

Are you an entrepreneur in Nigeria, here are 7 funding programs you should know.

For many entrepreneurs around the world, access to financing is a major concern. In “Listening and Learning for Success – What Nigerian Women Entrepreneurs Need,” I describe the needs of women entrepreneurs in Nigeria. Amongst the top issues discussed, was finding methods to reduce the costs associated with doing business in Nigeria and the need for competitive interest rates on loan products. Many young entrepreneurs in Nigeria feel that they cannot start a business because they do not have access to the capital required, and those who have started a business feel that there is little to no access to capital to expand or move on to the next level. It is important to highlight the grants, competitions, and prizes available to entrepreneurs around the world. Some of these funding programs are annual, while others are a one-time event. This article aims to inform entrepreneurs living in Nigeria of seven (7) funding programs to know. Some of these government programs and private organizations seek to increase accessibility, equality, and transparency by supporting the growth, development, and sustainability of businesses in Nigeria.

Have more programs, organizations or firms that we should know about? Please share, email: mary (at) awpnetwork.com