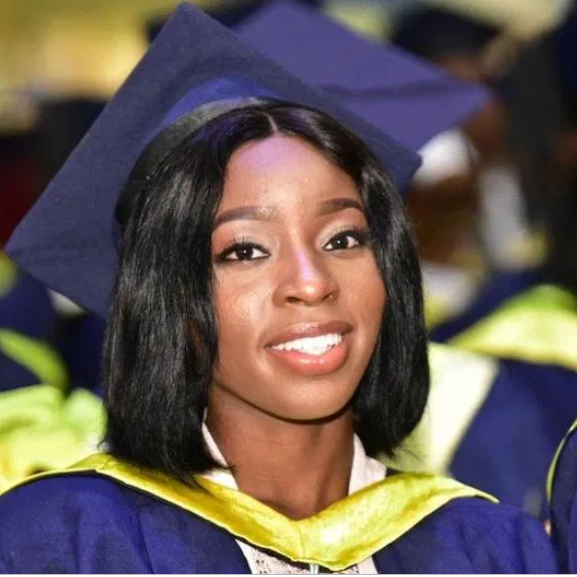 Ofure Mary Ebhomielen of the Department of Computer Science, Faculty of Science was the cynosure of all eyes on Tuesday as she was presented as the best graduating student at the 2019 Convocation ceremony of the University of Ibadan, UI.

Ebhomielen, who graduated with the highest Cumulative Grade Point Average, CGPA of 7.0 received a thunderous ovation when she was presented to parents and well-wishers at the ceremony.

She was given the opportunity to have a special handshake with the institution’s Vice-Chancellor, Professor Abel Idowu Olayinka, who could not hide his admiration for the star of the moment.

In her brief speech, which was intermittently interrupted by applause, Ebhomielen, who congratulated her fellow graduands, noted that they were being celebrated because they had burnt the midnight candles.

She noted that success did not come easy, adding that apart from making a good grade in the university, one still needed to prove oneself in the outside world.

Ebhomielen called on those who did not make upper-division to go out there and prove their worth.

Commenting, Olayinka said, “Ofure Mary Ebhomielen is the fourth person ever to have obtained perfect Cumulative Grade Point Average (7.0 out of 7.0) in the 71-year history of the University of Ibadan and the first female. This is worth celebrating and we are indeed very proud of her. The world is now under your feet, Mary, aim for the skies while we keep celebrating you.”

It could be recalled, such fest was also achieved by Mr Daniel Nkemelu from same department (Computer science), who also emerged as the best graduating student in 2016 with overall CGPA of 7.0.

CPGA of 7.0Department of Computer ScienceOfure Mary EbhomielenUniversity of Ibadan