Angel Wanjiru was born with a congenital disorder called hydrocephalus which affected the shape of her head. Speaking to BBC Africa in an interview,  Angel said, several doctors told her mother, she wouldn’t survive but she did. 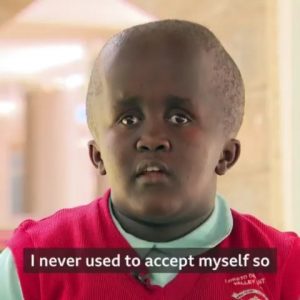 In 2016, at the age of 14, Angel released her first song, which was inspired by the discrimination she faced with people around her. She said the only way she has survived so far was ignoring people’s perception about her.

Angel encouraged everyone to accept themselves just the way they are. Watch this video for more details on her interview with BBC Africa.

Two-Time Cancer Survivor Marries For The First Time At 73